Firstly it has been far too long since I wrote anything. I have moved home, got back on the road and became an aunty to a beautiful baby girl. I’ve also ate an awful lot, drank an awful lot and slept an awful lot too. I could real off one million different excuses, but I won’t. Instead I’ll just vow to get better. I’m going to make writing monthly my first New year’s resolution. I’m going to make my second to stick to the first. Now I may have always failed at all my previous resolution, but they’ve always involved not eating so much sugar or physical exercise like the gym. However, this I can do from the comfort of my sofa so there really isn’t an excuse not to. So, watch this space I guess.

People often say to me that “They don’t know how I keep going.”
Well the complete truth is, I’m not even sure myself. I would love to be able to go into hospital and tell ever person laid up in bed how not to give up. I look back on what the last year has thrown/ catapulted at me with great force and I honestly can’t even believe I’m still here. I have lost several different people out of my life partly due to been ill. I understand this. It has been a messy rollercoaster of a year and if I could of ran, I would have …SCREAMING as I went. Since walking wasn’t really an option, running was certainly out the question. So, I guess I’ve had no choice but to kick into fight or flight mode. I’ve chose to fight. I’m always going to try to choose to fight.
My inspirations vary heavily while people such as Bradley Lowery and Henry Fraser provide me with amazing inspiration and Dua Lipa keeps me going with her sassy lyrics. I need to thank everyone that’s abandoned ship or showed lack of faith in my ability to keep going over the past year. These people are a huge part of the reason I carry on. I may have once turned my nose up at been called stubborn, but this is one exception where it may just be a blessing. I like to prove people wrong or make them regret their actions. This helps keep the stubborn mule in me motivated. It has become a running joke that I need a new life crisis approximately every three months to keep me fierce. However, this probably does absolutely nothing for my family’s mental state because they must deal with the crisis meltdowns first… But hey you can’t have it all can you, it’s give and take in this world, right? It’s no secret that when I go down I drag more than a handful of people with me. I promise to try and carry you all on my way back up.
Understanding chronic illness having never experienced it, is near impossible. It’s nothing I thought it would be, it’s so much harder in so many ways I wouldn’t have even considered prior to becoming ill.
I want to take you back to school for a moment. Remember the feeling of pure dread when you would hear the high pitch bleep echo round the sport hall of school and you’d realise it was the dreaded bleep test. That sick feeling in the back of your throat and in the pit of your stomach. Knowing that you’re going to have to push your body to breaking point. It’s going to hurt. It’s going to ache. It’s going to take away every drop of energy you have in minutes. It’s not going to be nice, yet you know it’s going to have to be done.
Well this is the exact feeling I get when I stand at the bottom of a flight of stairs. I look up to the top of the stairs and I can feel the lack of energy in every bone. The only difference is when you’ve had enough of running you can always stop. There is no drop out option while just living day to day life. This makes the option of never leaving my bed again so appealing. Once I rationalise that I’m not even a huge cat lover, so living the rest of my life out in one room with 20 cats probably wouldn’t bring me much joy. I must force myself through. There isn’t really another option.

I’m slowly learning to save my energy because the things I love doing tend to take the most energy. I refuse to live a nothing life, empty of the things I love because of something I cannot control. So I suppose the will to live a “normal” ish life is what keeps me going.

3 thoughts on “One foot in front of the other”

Remember how far you’ve come, and what you have achieved, not just how far you have to go.
You may not be where you want to be, but neither are you where you used to be.

Follow How I survive living life sick on WordPress.com 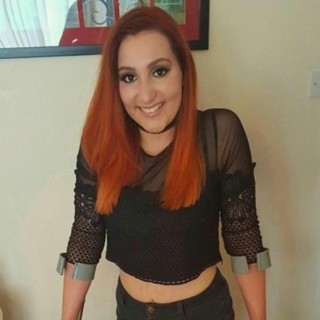 My name is Vanessa, I'm 21 and live in the North East of England. Almost a year after taking ill in July 2016, I've decided to start writing about what I've experienced and how my life's changed. I've been diagnosed with a neurological condition and will spend the next several years in recovery. I'm currently disabled and plan to write about the challenges living life ill can face.